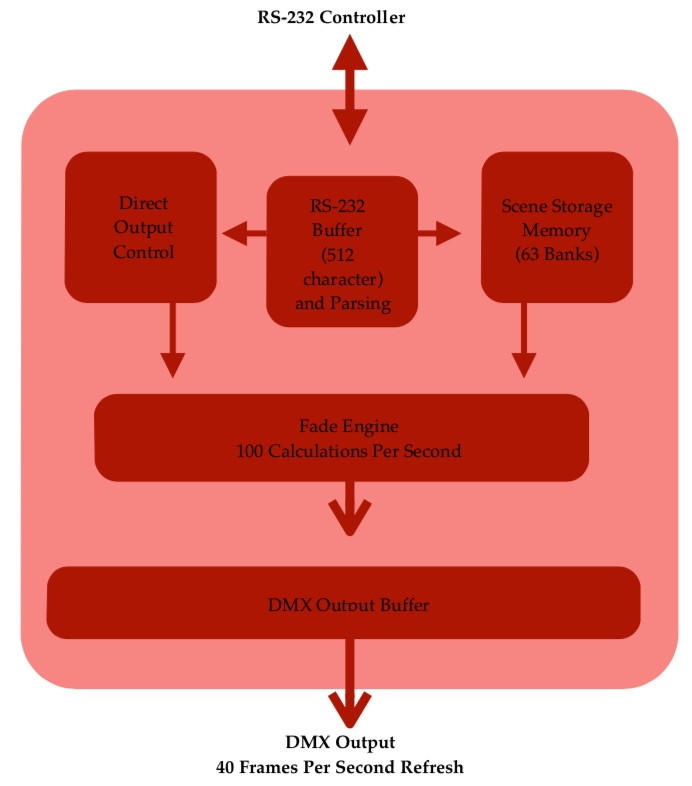 The RS-232 DMX Engine is a self-contained DMX controller. It accepts simple, human-readable commands via RS-232 and uses these commands to generate, recall and crossfade between DMX scenes. Incoming serial data is buffered in the system’s memory until a carriage return is received, which signifies the end of a command.

Once the command has been received, it is parsed. Commands containing syntax errors are ignored, and an error message is transmitted back to the RS-232 host. Valid commands are processed immediately.

Commands can contain information directing the system to

Users of high-end theatrical lighting consoles may recognize this feature as ‘simultaneous cue stacks,’ and it adds a great deal of flexibility to the system’s operation.

Standard XLR pinout per USITT. We use only official Neutrik XLR jacks.

DB-9 connector pin 4 (DTR) is used to update the system’s firmware. This allows new features to be added in the field, without requiring the hardware to be shipped back to our shop. If asserted (set high) by the PC or other controlling equipment, the system will wait in ‘reset’ mode for new firmware and the system will neither accept serial commands nor output DMX. In normal use, either physically disconnect this wire or ensure that DTR is cleared.

Depending on which external devices is sending the RS-232 data, a crossover cable (which swaps pins 2 & 3) may be required. When connected directly to a PC, a ‘straight’ cable works properly.

In the following pages, the text [cr] is used to represent a single data byte, the carriage return. This value is decimal 13 or hex 0x0D.

Many screenshots show data sent / received through a terminal program, as well as a screenshot from a DMX monitoring program. Data sent from the PC to the system is displayed in green text, and data generated by the system is yellow. Thus, system output can be easily compared with RS-232 input.